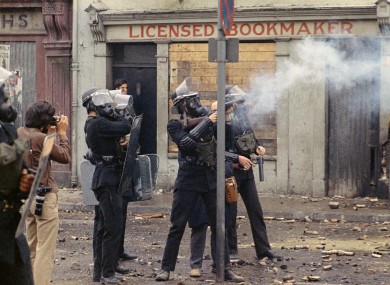 Lawyers working on cases dealing with Northern Ireland’s troubled past know that this field of legal work develops slowly. Sometimes, however, developments occur at an unexpected and unwelcome speed. Such has been the case this week. From the collapse of a controversial trial to the reporting of a legislative “amnesty”, the legacy of the Troubles remains an indelible part of both judicial business and daily life.

Joe McCann had been a member of the Army Council of the Official IRA. In 1972, he was the Officer in Command, First Battalion of the Official IRA and in charge of the Markets area of Belfast. He was suspected to have been involved in the murders of two soldiers and the attempted murders of four police officers (among other serious incidents). In the afternoon of 15 April 1972, he was seen by a Royal Ulster Constabulary (RUC) police officer who alerted a nearby patrol of paratroopers which included soldiers A and C. The police officer tried and failed to arrest Joe McCann, who was running away from him and the paratroopers. The police officer shouted at him to halt but he kept running. There was then sudden gunfire from behind the police officer, where the paratroopers were standing. Joe McCann was struck by two or possibly three bullets and died quickly at the scene. No forensic analysis was undertaken to determine who had fired the fatal shot.

Soldiers A and C gave statements to the Royal Military Police (RMP) the following day. However, these statements had not been voluntary. Instead, they had been ordered to make statements, without having been cautioned and without having had the benefit of any independent legal advice. They were not interviewed or cautioned by the RUC because a practice had been established by which the police would not arrest, question or even take witness statements from soldiers in cases involving shootings. This practice, designed to protect soldiers from being prosecuted, was condemned by the Court as “appalling”. In the event, no prosecution was brought against either soldier and no further developments in this case occurred for another 38 years.

In 2010, the recently created Historical Enquiries Team (HET) of the Police Service of Northern Ireland (PSNI) contacted A and C to ascertain any further information about the death of Joe McCann. The HET had been established as part of a “package of measures” (which included the Police Ombudsman for Northern Ireland and the Northern Ireland inquest system) to ensure that investigations of Troubles-related matters were compliant with Article 2 (the right to life) of the European Convention on Human Rights (ECHR). This was intended (see the 2013 report of Her Majesty’s Inspectorate of Constabulary) to be an answer to the plethora of failings identified by the European Court of Human Rights in the McKerr group of cases (McKerr v United Kingdom (2002) 34 EHRR 20, Jordan v United Kingdom (2003) 37 EHRR 2, Kelly v United Kingdom (2000) 30 EHRR CD223, Shanaghan v United Kingdom (2000) 30 EHRR CD370, McShane v United Kingdom (2002) 35 EHRR 23 and Finucane v United Kingdom (2003) 37 EHRR 29). However, there was a considerable degree of ambiguity to the role of the HET and the extent to which its staff were investigators. By the time the HET had contacted A and C, it had adopted a policy of giving cautions when interviewing former soldiers unless there was no prospect of prosecution. Meanwhile, the McCann family, who had been engaging with the HET, wrote a letter to be shown to A and C stating that they sought the truth of what happened to Joe McCann and not retribution. Two HET staff, both former police officers, met with A and C in March 2010 in the presence of their solicitors. While A and C were cautioned, they were not under arrest, and no reference was made to any specific offence, least of all murder or attempted murder.

The McCann family next applied to the Attorney General for Northern Ireland to direct a fresh inquest into Joe McCann’s death. This is a fairly wide power available at the Attorney’s discretion under section 14 of the Coroners Act (Northern Ireland) 1959 (not to be confused with the equivalent power in England for the High Court to make a direction on the Attorney General’s fiat). Instead of exercising this power, however, the Attorney referred the matter to the Public Prosecution Service (PPS). A and C were then charged with murder in 2017.

Sitting in the Crown Court, Mr Justice O’Hara determined that the trial of A and C turned entirely on whether the 1972 statements were admissible in evidence. The answer was a clear “no”. This was because of the rules surrounding the making of statements in criminal investigations at the time. O’Hara J summarised the position succinctly: “It is beyond dispute that at common law the statements would have to have been excluded because they were ordered rather than volunteered and because no caution was issued by the person taking them.”

And nor was the 1972 inadmissibility improved by the 2010 interview. This was because the 2010 interview was fatally flawed, not least because of the failure to caution either A or C for any specific offence. Moreover, the HET had not explained to either A’s or C’s solicitors the circumstances in which the 1972 statements had been made (the order to make them, in the absence of legal advice, etc.) which would have enabled the solicitors to advise their respective clients whether to make any statement at all in 2010. As O’Hara J pointed out, “Had the solicitors in this case known in 2010 what the circumstances were and that as a result the 1972 statements were inadmissible it is barely conceivable that they would have advised A and C to answer questions in 2010.”

Finally, the Court was acutely aware of the fair trial rights of A and C under Article 6 of the ECHR. The use of information to incriminate a person when that person supplies the information under coercion flies in the face of the self-incrimination protections guaranteed under Article 6 (see e.g. Saunders v United Kingdom (1997) 23 EHRR 313, [68]).

[a prosecution] is not possible in the present circumstances where what is put before the court is the 1972 statement dressed up and freshened up with a new 2010 cover. It is all still the same 1972 statement.

The past as politics

A little over a week before the collapse of the prosecution against soldiers A and C, Veterans Minister Johnny Mercer MP resigned his post, criticising the UK Government for allowing “endless investigations” into historic killings involving the armed forces in Northern Ireland. Barely a week after the collapse of the prosecution, The Times reported (paywalled) that the UK Government intends to bring legislation to exempt perpetrators (state and non-state actors) from prosecution for criminality during the Troubles, with the exception of prosecutions for war crimes, genocide or torture. The news met with widespread condemnation across Northern Ireland’s political parties. Of course, plans for legislating around legacy prosecutions and investigations were foreshadowed in a statement to the House of Commons by its Leader, Jacob Rees-Mogg MP on 11 February 2021.

However, the present political intervention notwithstanding, it is important to remember that the future of legacy investigations and prosecutions had been agreed very recently: the Stormont House Agreement 2014. Although that Agreement was reached three Northern Ireland Secretaries and two Parliaments ago, it had laid out important points which should give the current UK Government pause for thought. Two points in particular remain as relevant today as they have ever been: the need for independent investigations and prosecution decisions for offences committed during the Troubles and the need for these processes to be compliant with the ECHR. In fact, the 2014 Agreement had committed the Northern Ireland Executive to make the inquest process more compliant with the ECHR (para 31). Draft legislation implementing the 2014 Agreement made explicit reference to general and specific ECHR obligations in multiple clauses, including in clause 6(4) in which a new independent investigatory body was to conduct its investigations “so as to secure that its Article 2 obligations are complied with”. It is therefore important to remember that general, sweeping amnesties are not ECHR compliant (see e.g. Marguš v Croatia (App. no. 4455/10; dec. 27 May 2014; GC), [127]).

Dealing with Northern Ireland’s past is self-evidently a much wider and more complex issue than fulfilling manifesto commitments to Northern Ireland veterans, as the Commons Leader had remarked in February. The near-universal condemnation of The Times’ report by Northern Ireland’s political parties (itself a rare event) is a testament not only to the deep unpopularity of the idea of a general amnesty, but also to a concerningly selective political memory in the corridors of Whitehall and Westminster. This selective memory particularly appears to forget the fact that the procedural duty under Article 2 of the ECHR to conduct an effective, victim-centred, independent, timely and sufficiently transparent investigation into suspicious deaths originated in a State killing directly connected to Northern Ireland.

Ultimately, it is not possible to analyse unpublished proposals. But it is important to appreciate that the precious few steps which have been taken to deal with Northern Ireland’s past have been taken in answer to human rights protections and obligations. These must be strengthened, not rendered meaningless.

As US Vote Counting Continues, ‘Much less Work Will Get Executed’ however ‘Enterprise Goes...