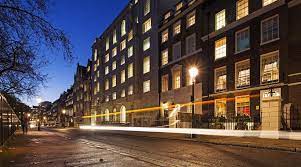 On 26 March, the Government of the People’s Republic of China announced sanctions against a number of British individuals and entities. Most publicity has been attracted by the inclusion of well-known politicians on the list. But the most sinister inclusion may be “Essex Court Chambers”. Whereas the sanctioning of a politician, who is unlikely to own property in China, is a largely symbolic gesture, the announcement in respect of the set of barrister’s chambers strikes at the heart of the English legal system and the services offered by English lawyers. It also has serious ramifications for all commercial transactions relating to China.

The decision against Essex Court Chambers is understood to be related to the fact that four individual members of those Chambers had together written an opinion concerning the treatment of the Uighur population in the Xinjiang Uighur Autonomous Region. It appears that that legal opinion was written pursuant to instructions received from the Global Legal Action Network. Each of the four barristers was thus providing independent legal advice for a client pursuant to their professional obligations and qualifications as members of the Bar of England and Wales subject to the regulatory supervision of the Bar Standards Board. According to the chambers’ website, my source for this material, none of those four barristers published that legal opinion.

So, for giving advice in accordance with the traditions and obligations of those who practice at the English Bar, they and others who practice from that address as members of those Chambers, have been made the subject of sanctions for what China has said was spreading “lies and disinformation”.

I leave aside here the obvious nonsense that for a lawyer in confidence to write an opinion for his client can conceivably be described in the English or any other language as spreading that material, whether it
be true or false. Equally obviously the Chinese government has failed to grasp that the barristers who wrote this opinion while belonging to a group of lawyers practising out of the same address and pooling resources such as library and secretarial facilities are nonetheless individuals who are not partners in a business or members of a firm or company running that business.

The sanctions not only ban those affected from entering China, Hong Kong and Macau and freezing any property they may have in China, but – far more importantly – prohibit all Chinese citizens and institutions “from doing business with” those on the sanctioned list. Seemingly this means that all Chinese clients are prohibited from instructing any barrister at Essex Court Chambers.

The sanctions and these actions against these lawyers for doing their job must be seen as an outright attack on all who offer services whether as lawyers or arbitrators to businesses and individuals in China. For what it means is that if a lawyer advises someone in terms which are unappealing to the Chinese government and the recipient of that advice makes it public or the Chinese government otherwise takes a dislike to what is being done by the client that lawyer is at risk of similar future sanctions.

The ramifications affect all British companies who do business with Chinese clients. Typically, such contracts include provision for disputes to be resolved by arbitration, often within Hong Kong. Henceforth, the members of the sanctioned chambers are to be refused admission to the territory of Hong Kong and the whole of China. So, unless the Chinese clients agree to an arbitration outside China, for instance in Singapore, the British firm’s freedom of choice of advocates is now subject to Chinese Government vetting.

Today it is the members of Essex Court Chambers who are sanctioned. But tomorrow it might be Clifford Chance, Freshfields or some other major city law firm or Chambers of barristers which wittingly or otherwise offends the Chinese state. The Financial Times is right to say that ‘the situation underlines the increasingly difficult position for UK lawyers that are exposed to potentially lucrative arbitration work in China via Hong Kong’s legal system’.

That is the threat which the Chinese state has issued. Lest it be thought that I exaggerate, we need only to look at the attacks being mounted by the Chinese state on the major retail brands such as H&M, Nike, Burberry and others for having expressed concern at what is going on in the same cotton-growing Xinjiang autonomous region. According to the BBC, while H&M’s physical stores in China remain open, it is no longer possible to hail a taxi to the shops using an App and consumers cannot shop online. Burberry and other leading brands have lost China spokespeople. The Chinese state is driving its consumers to abandon those who offend it. In this country it has attacked lawyers, MPs and members of the House of Lords who have spoken out against what they believe to be happening in Xinjiang.

The Lord Chancellor, as Secretary of State for Justice, and the Foreign Secretary in particular must see that steps are taken to protect our lawyers, our businesses and our private citizens, as well of course, as our representatives in Parliament. They must make it plain that threats and bullying will be resisted and treated with the contempt which they deserve.

The professions through the Bar Council and the Law Society must act also at once and involve the International Bar Association and the American Bar Association to ensure that lawyers everywhere act with solidarity. Essex Court Chambers cannot be left isolated. It would be intolerable if other chambers or law firms simply took over work which is transferred away from Essex Court. Urgent thought must be given to special codes of conduct to prevent that.

The commercial world must rapidly revise the basis on which it is prepared to contract with Chinese firms to insist on dispute mechanisms outside China if future contracts are to be made. Such policies will only be effective if other countries in the Western world are willing to join in a united stand on trading practices. Our legal profession must, therefore, receive every support from our Secretaries of State. Ambassadors in Washington and elsewhere must get to work to bring other countries on the side in making it plain that behaviour such as the Chinese state has manifested this week will not be tolerated and will be resisted.

Since 29 March, China’s mouthpiece Global Times has boasted on the web:

A UK chambers’ removal of a legal opinion defaming Xinjiang shows China’s counter-sanctions are an effective deterrent against rumours.

These steps by the Chinese state foreshadow dangers for a much wider body than those immediately affected. They call for a concerted and strong response by lawyers and governments from all democratic state.  Individual sets of chambers, the commercial Bar and the Bar Council as a whole must press the Law Society and major firms to mount a co-ordinated response and take this forward through suitable national and international bodies

This is a call to arms which must not be ignored. We are all ‘Essex Court’ now.

Lord Sandhurst QC is former chair of the Bar Council who practised as Guy Mansfield QC. This article was originally posted in The Journal of the Society of Conservative Lawers

The Lengthy Tail of COVID-19 Litigation in Europe | Regulation.com Worldwide

EU-US Privateness Defend Substitute Doubtless, However Not Lengthy for This World | Legislation.com Worldwide

Slaughters and Skadden Slender London Workplace Search, Dentons and Latham Be part of the...

17 Companies Be a part of Crowell & Moring in Searching for Trump’s Elimination...