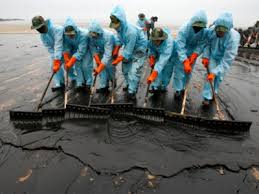 A traditional phrase in the common law, such as “continuing nuisance”, may mean a number of things in different contexts, as we will see clearly from this oil spill case. The claimants argued, unsuccessfully, that the presence of oil from the spill which had come onto their land was a continuing nuisance for as long as it remained there – which, they said, should get them around the limitation problems in their claims.

There is an oil field 120km off the coast of Nigeria. Oil is extracted by Shell using a mobile oil rig (Floating Production Storage and Offloading facility, or FPSO in the jargon), with the oil being sent from the FPSO, via submersible flexible flow lines, to a Single Point Mooring buoy for onward discharge into oil tankers.

On 20 December 2011, one of the flow lines to that buoy ruptured, and in the course of the next 5 or 6 hours large quantities of oil flowed into the sea. The vessel onto which the oil was to be loaded was the MV Northia. Criticism is made by the claimants as to why the operators of the FPSO or of the vessel did not notice that the amount of oil coming from the FPSO did not accord with the amount of oil received by the vessel.

The claimants (some 27,800 individuals and 457 communities) live and work along the Nigerian coast. Their claim against various Shell companies is that oil washed up onto their land, and affected their fishing, farm land, drinking water, mangroves (wood for energy), shrines, land values and industries associated with fishing and farming.

The claimants face various problems before they get to the underlying merits of their claims. They first issued proceedings on 13 December 2017 (just under 6 years after the spill date) against Shell companies no longer parties to the proceedings and SNEPCO, a Nigerian company, current D2. D1, (STASCO, a UK-domiciled company) was sought to be joined on 4 April 2018, more than 6 years after the spill.

The limitation period in nuisance is 6 years from the accrual of the cause of action.

But the claim against Nigerian SNEPCO (within the 6 years) can only proceed in the UK, if the claimants also have a claim against STASCO – the UK “anchor” defendant in the jargon of these multi-party jurisdictional cases. Nigerian SNEPCO operated the FPSO (the immediate candidate for the thing which went wrong), and UK STASCO had little to do with that. Nearly two years later, the claimants sought to make an additional claim against STASCO in respect of its management of MV Northia, the vessel receiving oil at the relevant time: by order of the court below, the deemed date for commencement of this specific claim was 2 March 2020, so well after the 6 year limitation period if it ran from the spill.

The way out of these interconnected problems of limitation and jurisdiction was said to be that the claimants had a continuing cause of action in nuisance whilst the oil remained on their land. If Shell and indeed anyone else had not carried out any clean-up, then the cause of action remained ticking away, day on day, until the oil was removed or remediated.

The Court of Appeal

The Court said that this was not a case of a continuing nuisance.

A cause of action in tort is usually a single, self-contained package of rights, relating to an act or omission which has caused damage and is actionable in law. Thus any claim in negligence in this case, arising out of the event when the oil leaked into the sea on 20 December 2011, gave rise to a single cause of action, which, as a matter of law, was completed when damage occurred.  at [52]

So the harm occurred when the oil landed.

So what was a unbroken nuisance in legislation?

The everyday persevering with nuisance is encroachment of tree roots from D’s land to C’s land. Usually the tree roots trigger dehydration within the soil under C’s land which can trigger cracking to C’s property. D’s failure to abate that nuisance by eradicating or pruning the tree is a unbroken obligation. In a current case, about Japanese Knotweed, Williams v. Network Rail, the CA determined that the persevering with presence of roots may confer a reason behind motion although they’d not brought on bodily harm to the properties.

The CA stated that the failings within the claimants’ arguments in opposition to Shell had been these:

(a) it equated the presence of the oil (colloquially, a nuisance) on the claimants’ lands with the authorized query of when every claimant gained a reason behind motion;

(b) it equated nuisance with bodily harm or hurt.

The CA referred to the results of equating these propositions. An organization could be answerable for the results of a one-off leak even 50 years after the spill if the contamination remained on the claimants’ land.

However the CA made it clear that the reason for motion didn’t come up when the spill occurred. Every claimant didn’t achieve a reason behind motion till the oil really arrived on his or her land. This may have occurred to most claimants inside a short while of the spill. However the timing of this is perhaps totally different for these claimants who lived up one of many delta channels additional away from the FPSO. So while most claimants’ claims could also be statute-barred, these additional away should be inside the 6 yr interval in respect of the declare in opposition to SNEPCO (the Nigerian subsidiary) however will face additional difficulties (as we have now seen) if their actual declare is in opposition to the anchor defendant STATSCO in respect of the vessel MV Northia. If the STATSCO claims are sure to fail, then the SNEPCO claims (within the UK courts) fall with them.

An vital factor of the claimants’ case was that Shell remained accountable because the causer of a unbroken nuisance. At [70ff] the CA handled this argument; it stated there was no authority in assist of it. The claimants didn’t fairly go so far as saying that Shell was obliged to scrub the contamination up (see [73]) however stated that the reason for motion remained till the contamination was cleaned up (whether or not by Shell or the claimants or whoever). A part of the issue within the argument is recognized in [74]-[75]. An vital factor in legal responsibility for nuisance is the occupier’s management of his or somebody’s land and therefore his skill to stop or eradicate the nuisance. As soon as the oil had left the pipe, Shell didn’t have this management; it stated it couldn’t clear up the ocean unilaterally, with out regulatory approval, and it could additionally want entry to land within the affected delta to remediate issues there.

Because the CA emphasised, this didn’t imply {that a} declare correctly introduced inside the limitation interval in opposition to a defendant over which the UK courtroom had jurisdiction couldn’t get well the prices incurred or to be incurred by claimants on remediating their land.

Another type of persevering with nuisance

This is identical phrase utilized in a special sense, in respect of a check for legal responsibility in nuisance. A defendant could also be liable not just for inflicting the state of affairs which creates a nuisance but additionally for failing to cease that state of affairs when he has enough management; in that quite differing sense, he will likely be persevering with a nuisance initially created by others. That is well-established legislation going again to the 1930s and 1940s.

For an environmental lawyer, this can be a fascinating case. There was appreciable ambiguity within the legislation as to what a unbroken nuisance is and the way the idea matches with the legislation of limitation. One concern is whether or not a giant spill on D’s land which has gone deep into the underlying geology beneath the land can stay actionable as a result of it continues to have an effect on neighbouring properties – although it began affecting these properties a few years in the past. An analogous drawback arose within the Cambridge Water case: see [36] of the current judgment.

The dilemma, effectively pointed up on this case, is between both permitting long-tail liabilities to persist opposite to at least one coverage factor of the legislation (i.e. limitation), or stopping the restoration of present and future losses regarding acts and omissions occurring a few years earlier than the declare is introduced.

The CA emphatically selected the second.